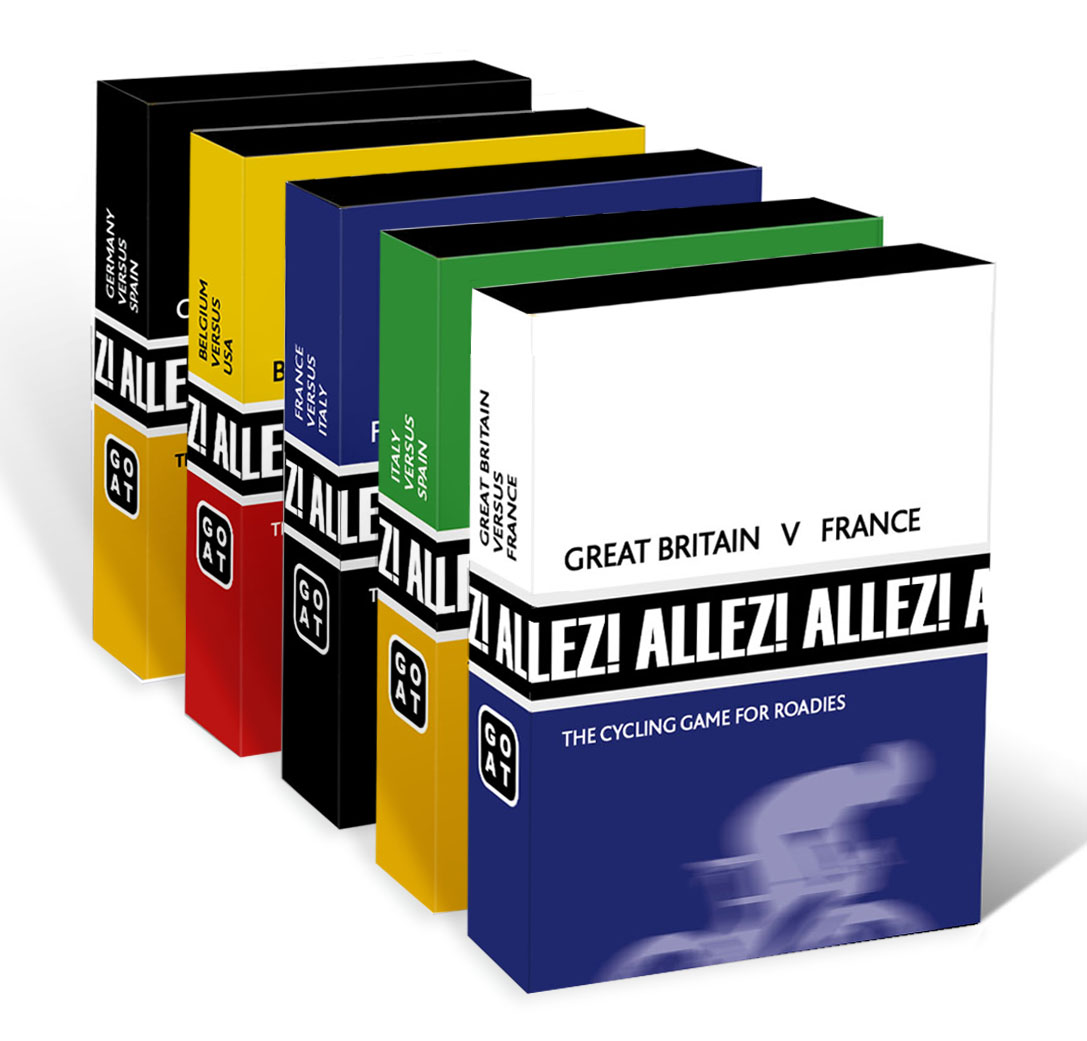 As seen on Road.cc! Click here for the review
"A light-hearted, stats-based card game to keep you amused during the long winter closed season".

The game for Roadies! We’ve scoured the planet for some of the greatest road cyclists of all time and assembled them into their nation’s colours so you can play them off to find out which is the greatest cycling nation of all time. Will Mark Cavendish win it for Great Britain or will Jeannie Longo pull out the stops for France? Find out for yourself in this fun and informative game designed for cycling enthusiasts of all ages. Play with friends or go solo - these cards are filled with loads of facts and stats from one of the World’s best loved sports. 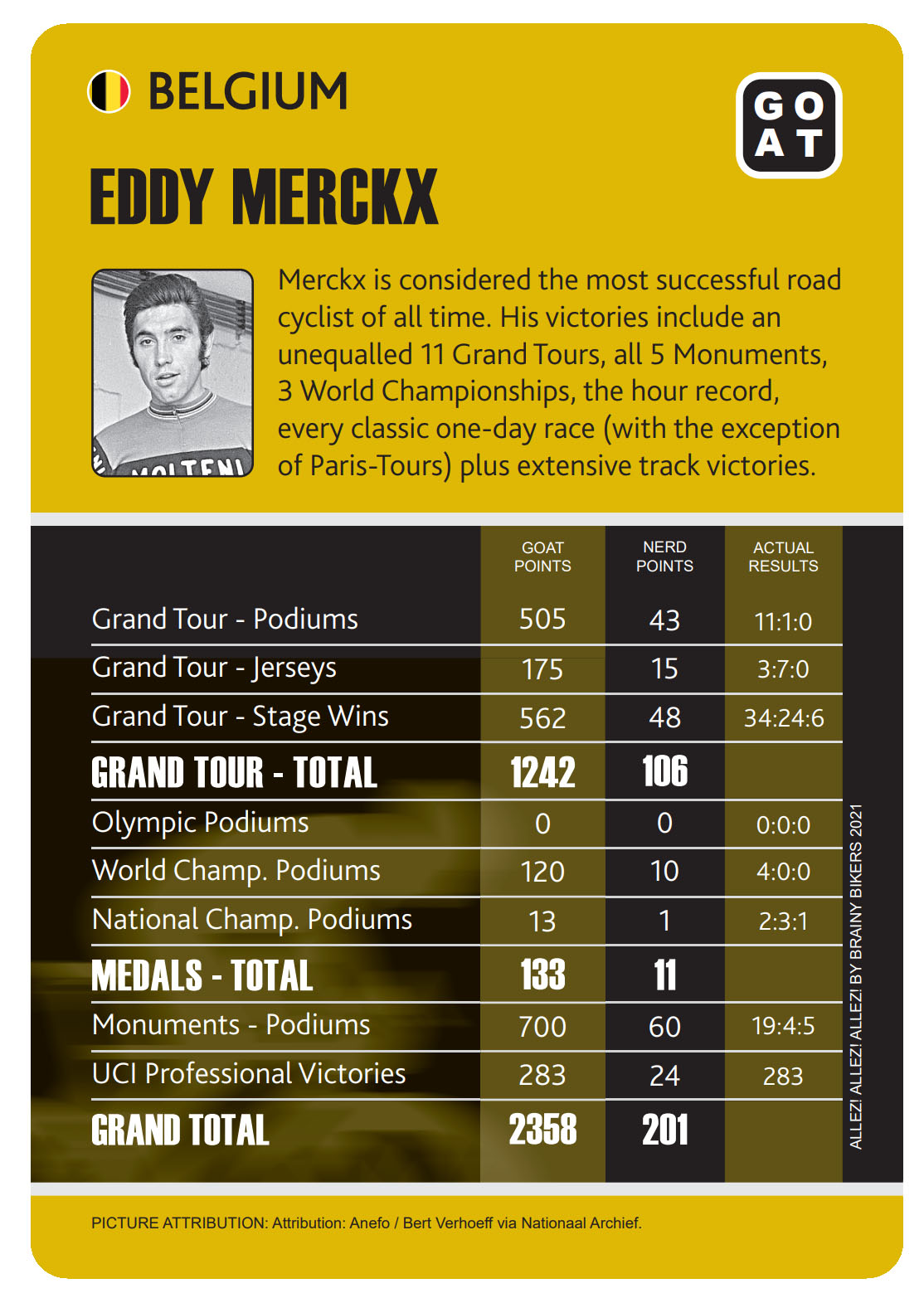 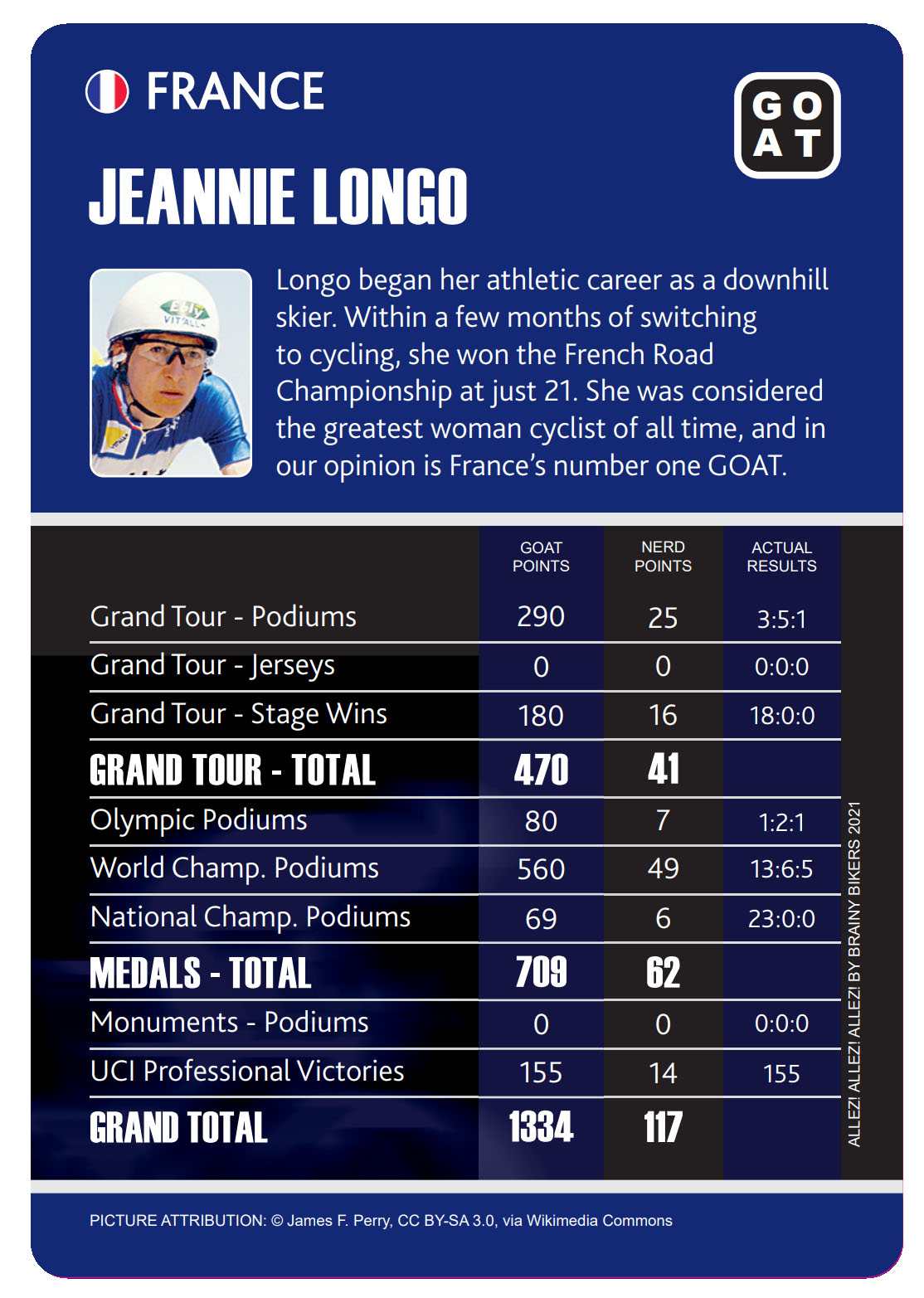 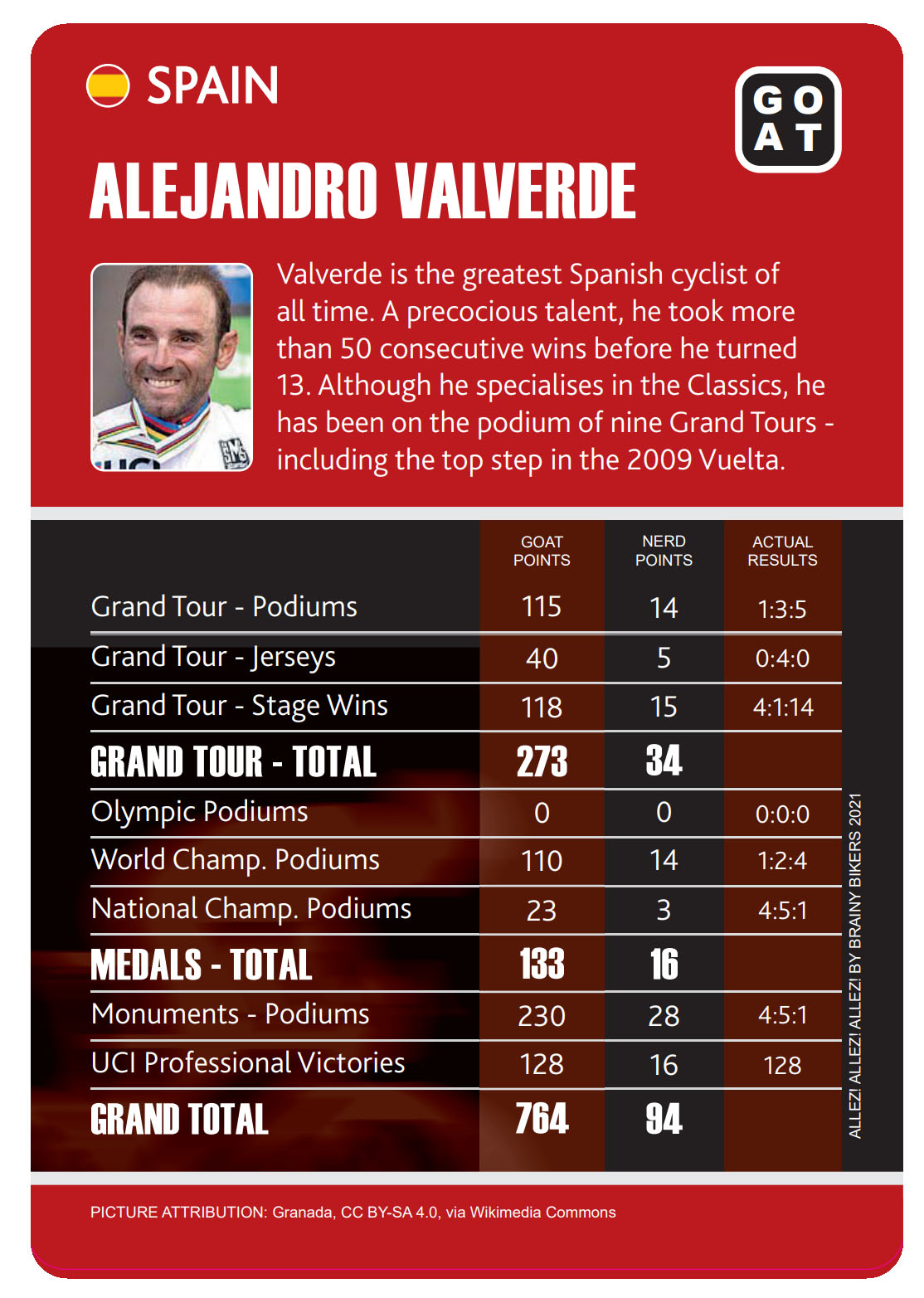 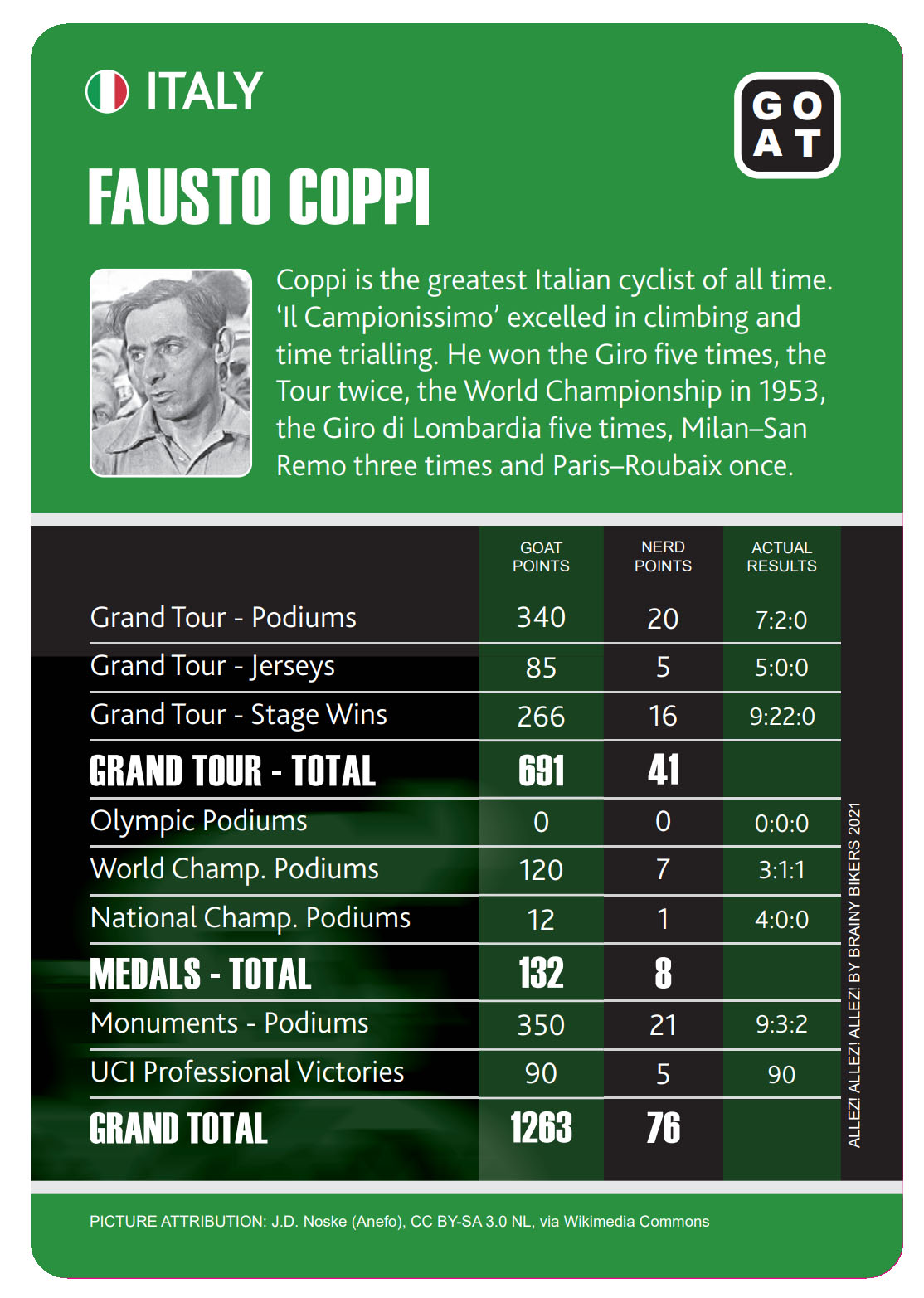 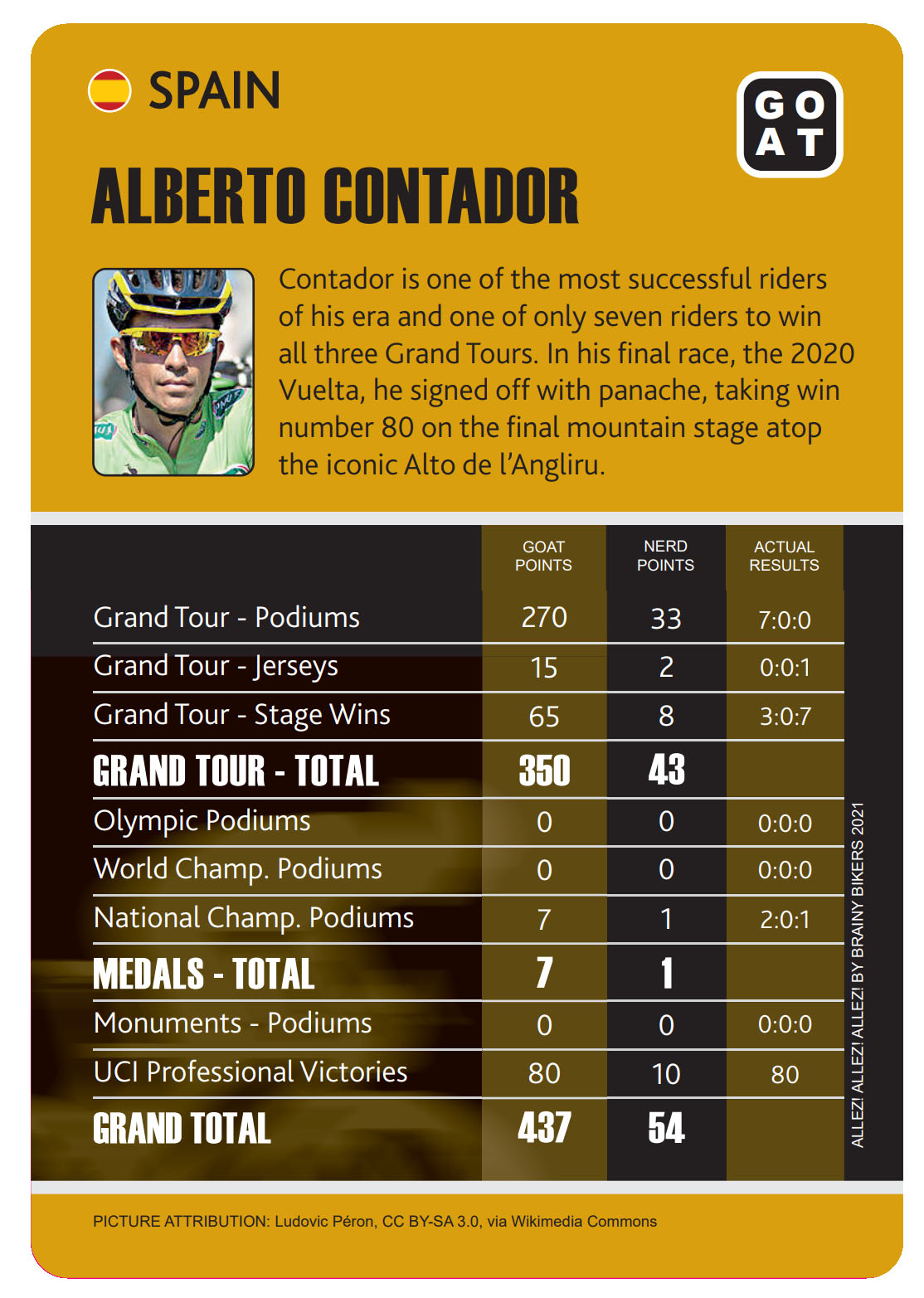 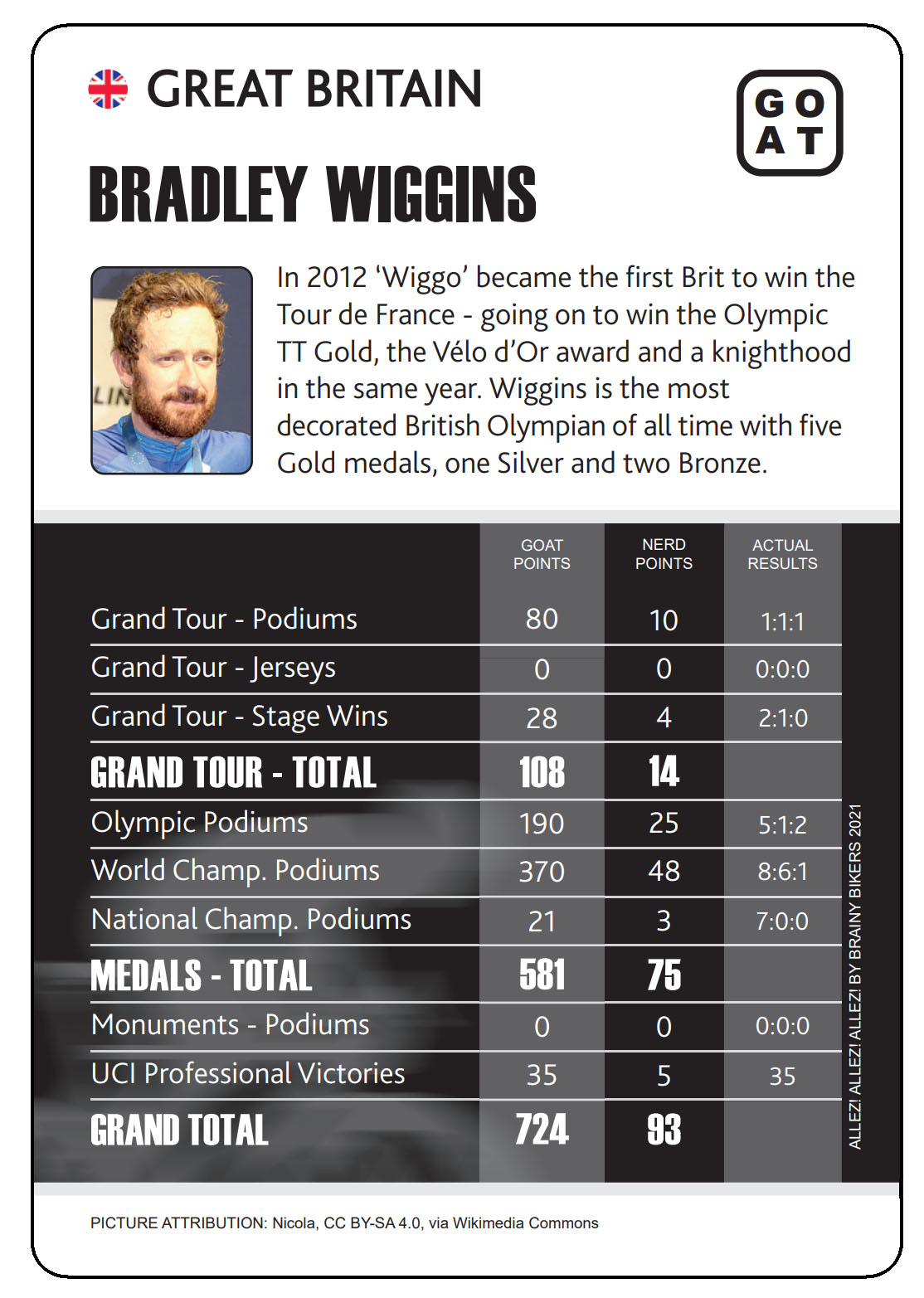 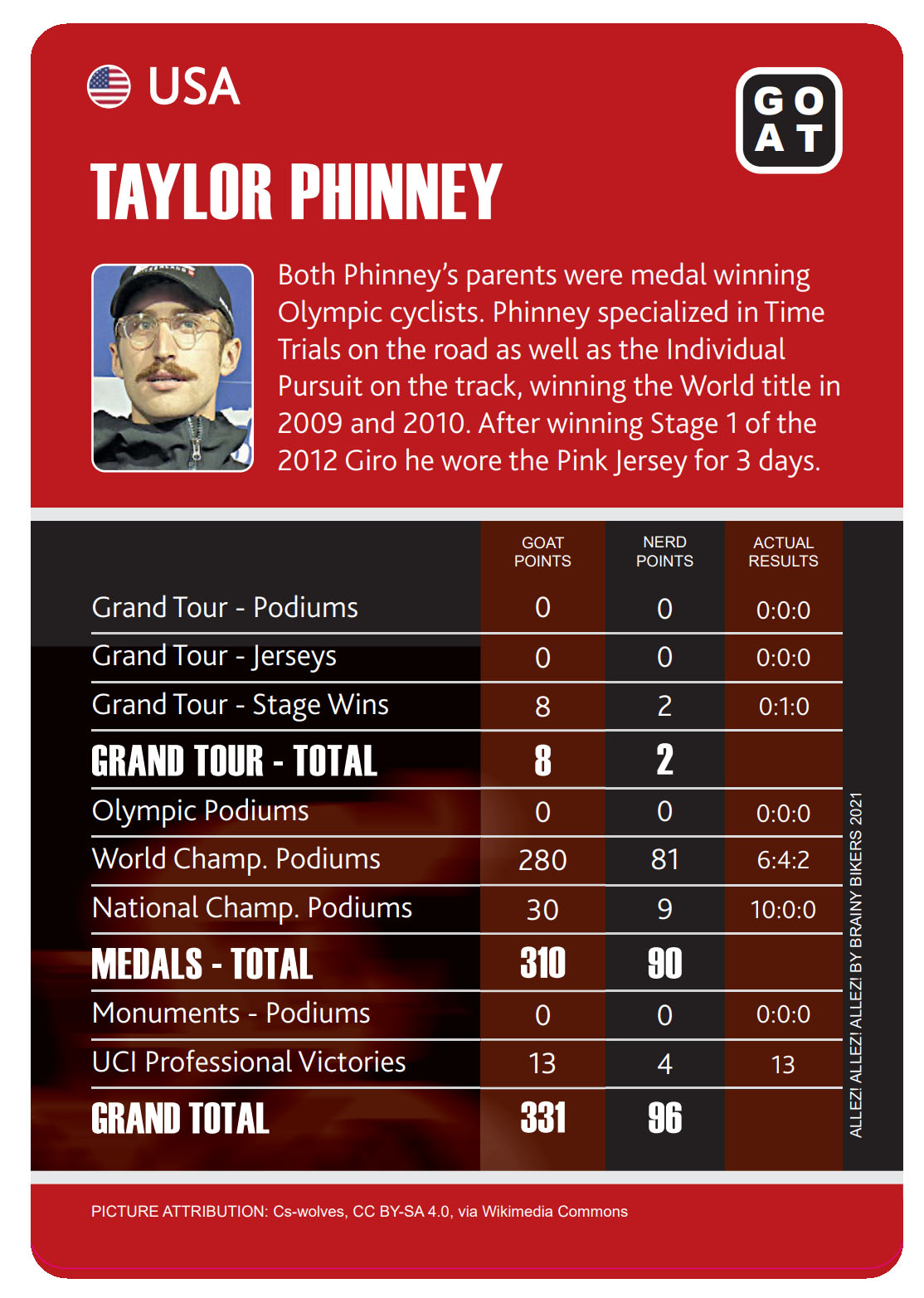 There's 21 titles in the series: CLICK THESE LINKS TO GET SPEEDY DELIVERY FROM AMAZON

ABOUT OUR SPECIAL GOAT & NERD ALGORITHMS 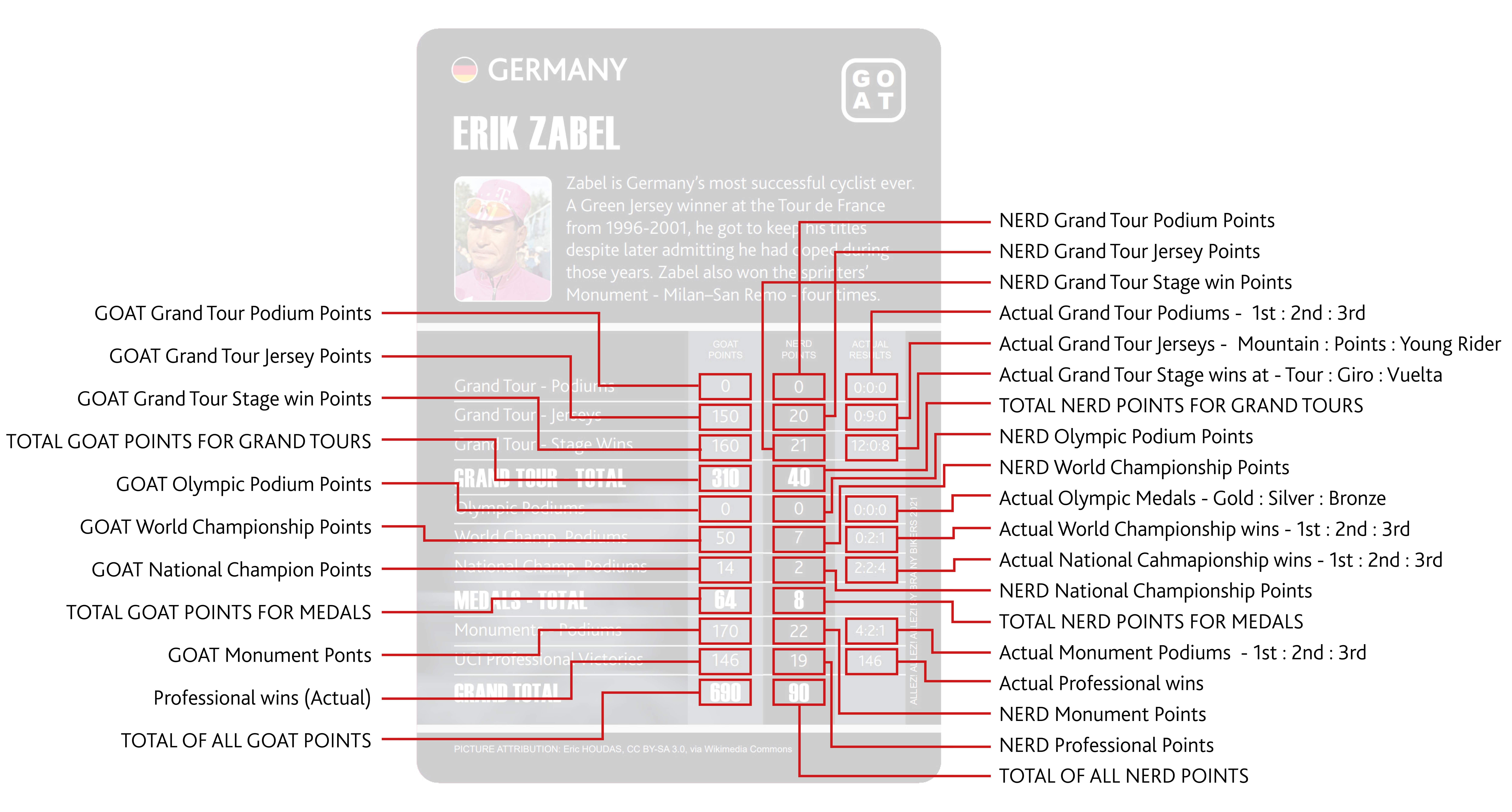 Here's how the GOAT Scores are calculated: 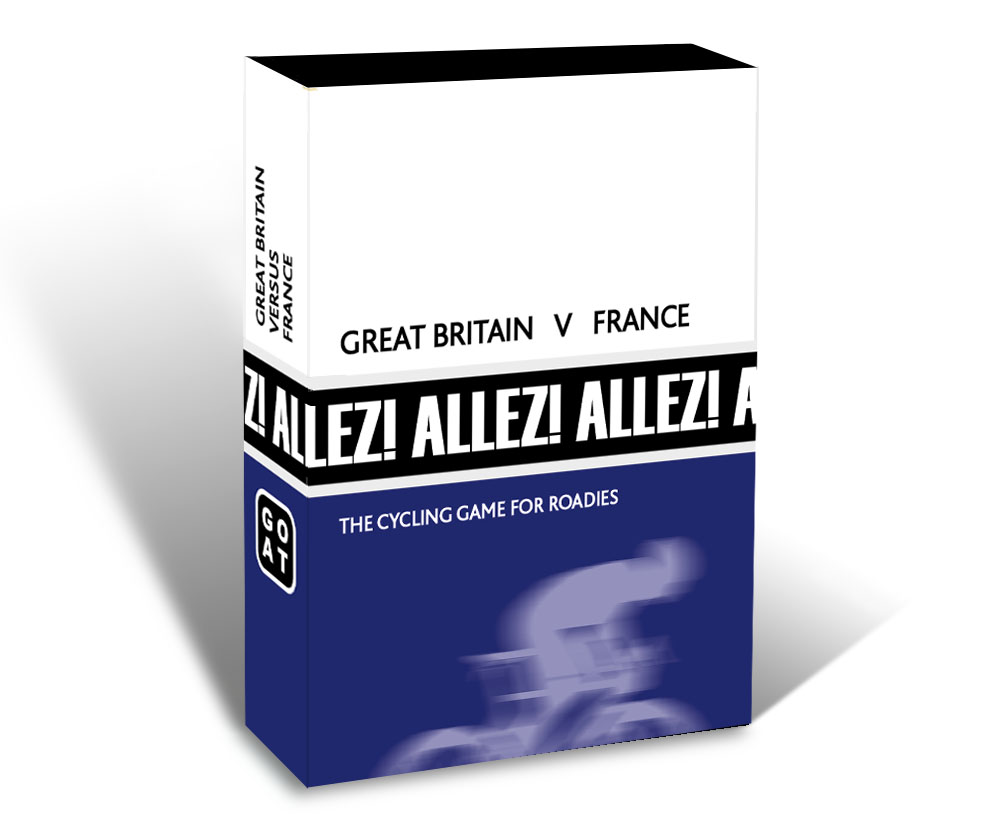 We've chosen 40 of the best British road and Track cyclists and pitchecd them against 40 of the best from France to find out who is the greatest cycling nation of all time. 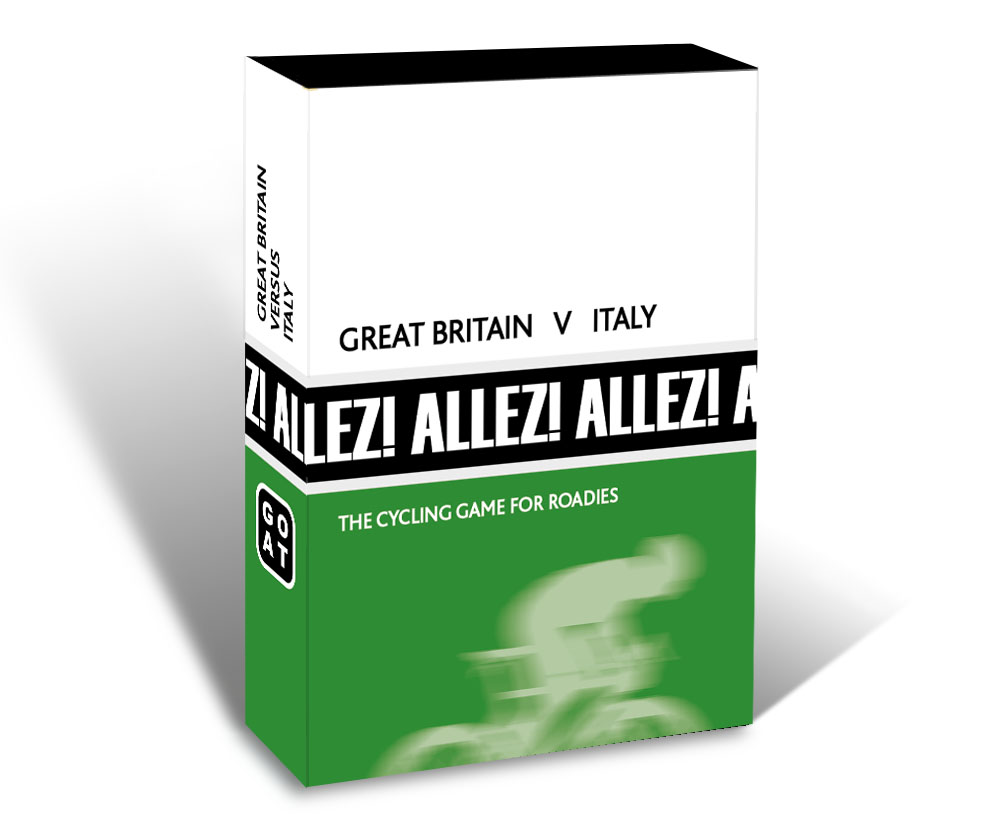 Will Laura Kenny or Tom Simpson win it for the UK or will Fausto Coppi or Francesco Moser pull out the stops for Italy? Find out for yourself in this fun and informative game. 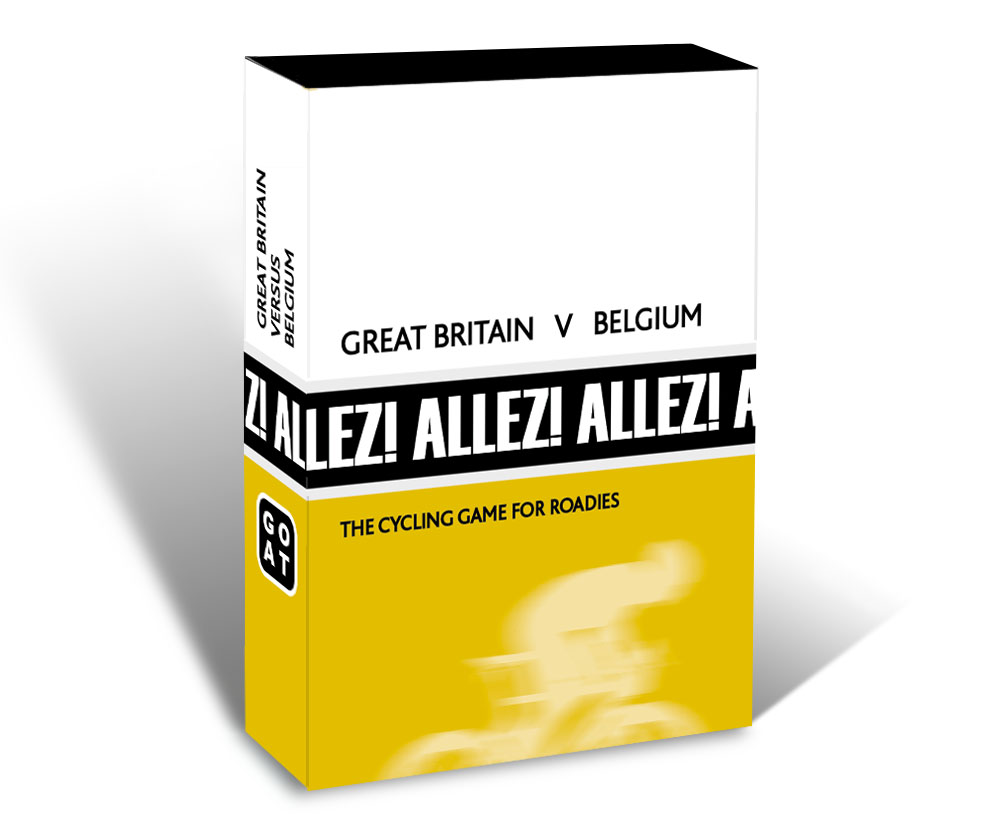 Will Wiggo or Boardman win it for the UK or will Eddy Merckx or Rik van Looy pull out the stops for Belgium? Find out in this game designed for cycling enthusiasts of all ages. 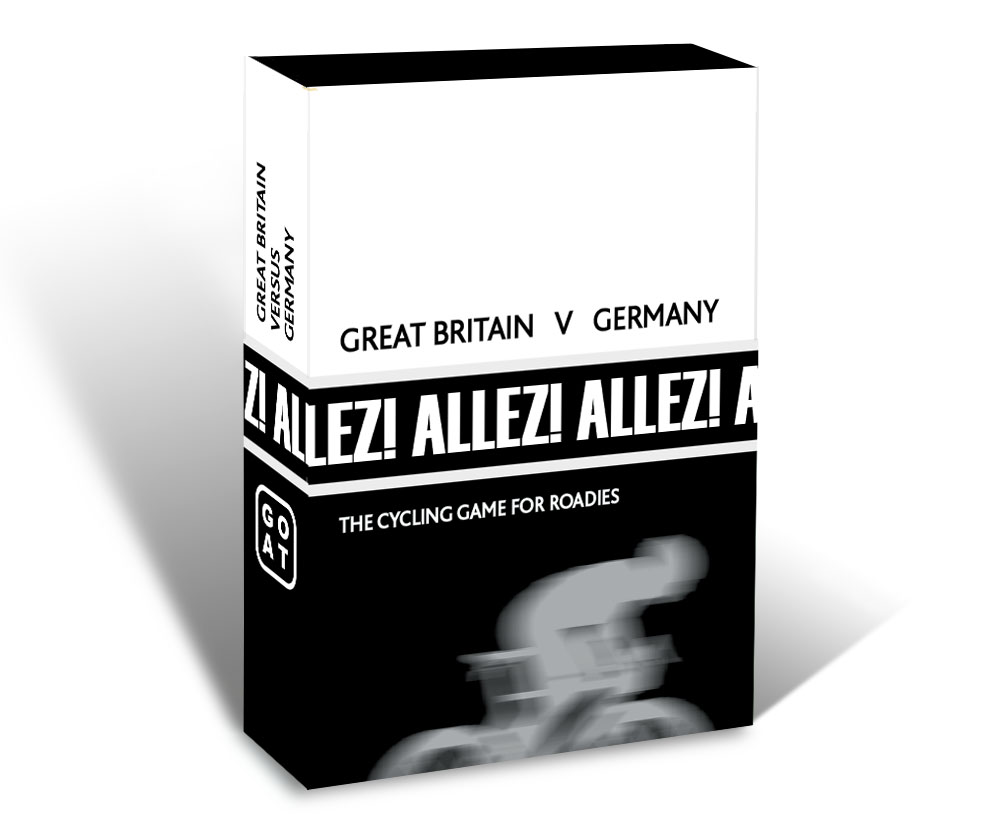 Will Geraint Thomas or Beryl Burton win it for the UK or will Erik Zabel or Judith Arndt pull out the stops for Germany? Play with friends or breakaway and go solo!

1. Shuffle and deal the Rider-Cards evenly between the two DS’s.

2. Each Directeur Sportif (DS) holds their Rider-Cards in a single pile with just the top card of their chosen nation facing them.

3. The youngest DS starts by calling out a stat from their top card (e.g. “Olympic Podium GOAT Points 30”).

4. The opposing DS reads out the same stat from the top card in their hand (e.g. “Olympic Podium GOAT Points 20”).

5. The DS with the highest stat* wins that head-to-head race and their opponent’s Rider-Card. This card is now flipped over by the winning DS, so the winner’s chosen nation is face-up, and placed with the winning card at the bottom of their card stack.

6. The winning DS then calls the stat for the next round from the next Rider-Card. Play continues until one DS - the winner - has won all their opponent’s cards.

*If stats are equal, the DSs place that pair of cards to one side and the caller chooses another stat from their next Rider-Card to challenge their opponent with. The winner takes their opponent’s Rider-Card and the tying cards from the previous round(s).

i GOAT (Greatest Of All Time) Points - these figures show a riders total points in each category using weighting factors to show the relative importance of the race and achievement. (e.g. Tour wins gain more points than Vuelta wins.) GOAT Points are the fairest way to compare the achievements of riders across eras and between nations.

ii. NERD (Nationally Equalized Rider Data) Points - these figures take into account the relative strength of a rider’s nation on their achievement. So, whilst it is common for Italian riders to do well in the Giro d’Italia, it is rare for riders from the USA to do well in this event. NERD Points factor this in. If you are the DS of a weaker cycling nation, challenge your opponent using a stat from the NERD Points column to increase your chances - if your opponent’s equivalent NERD Points stat is lower than yours, you’ve won the head-to-head race.

iii. Actual points show actual unmodified data. Use these points as part of the game or just to geek-out and discover what a rider has and hasn’t actually won. There are three types:
1. Podium Points: the number of 1st : 2nd : 3rd places a rider has achieved;